Where is k2 Location: One of the many peaks of the Karakorum Range, on the border of China and Pakistan, (Taxkorgan Tajik county China and liberated Kashmir, Pakistan).

K2 Mountain, Highest in Pakistan and 2nd Mountain High Elevation in the World.

K2 Mountain offers a beautiful serene sight to look at. This extremely picturesque peak rises single over 3000 m above the valley bottom at its base. The relief in comparison to height is unique. K2 has placed far away from travel routes and inhabited areas. It gained the attention of climbers only in an early 20th century. K2 is a consistently steep pyramid on almost all sides, offering very difficult and dangerous access for the climber.

This truth is unwelcome by climbers, who call it the “Savage Mountain”, forgetting totally the artistic scenery and visual appeal of the ranges. What else could they expect at an elevation of 8611 m? besides rock, ice and glaciers. The savagery is highlighted as the fatality rate is 2nd highest among 8000 m peaks after Annapurna being first. One of four climbers dies from those who reach K2 Summit. So far all attempts to climb this mammoth peak in winter have failed.

The Great Trigonometric Survey (GTS) was conducted in 1856 by Thomas Montgomerie. In his first survey of Karakoram from Mount Haramukh, about 210 Km South, he labeled two highest peaks as K1 and K2 and lower ones K3, K4, and K5. In GTS, preference is given to local existing names when defining/recording. The peaks K1 to K5 were already known as Masherbrum, Broad Peak, Gasherbrum II, and Gasherbrum I, while K2 had no local name being located so remote and invisible from Askole, the last village. Only a feeble glimpse is possible from Baltoro Glacier.

In 1892 British Expedition led by Martin Conway reached ‘Concordia’ on Baltoro Glacier. The first serious attempt to climb K2 was made in 1902 by Oscar Eckenstein and Aleister Crowley from North Ridge. He could reach only 6500m after 5 costly attempts in the record longest duration of 68 days, of which only 8 were clear days. The next expedition in 1909 by Luigi Amedeo, Duke of Abruzzi, reached 6250m on South East Spur (now termed Abruzzi spur or Ridge) with extreme difficulty. He failed to find a better alternative route and declared that K2 cannot be climbed at all. Charles Houston, an American, attempted in 1938. He surveyed and concluded that Abruzzi spur was the best route and reached about 8000m. Extreme Bad weather forced him back. Next year Fritz Wiessner was only 200m. Short when disaster struck and four climbers disappeared. Charles Houston again attempted K2 in 1953. A strong storm pinned the team at 7800m for ten days. In a desperate retreat attempt, a mass fall occurred. Fortunately, Pete Schoening managed to save the entire team except for Art Gilkey, who got killed. This team effort and courage is a milestone in mountaineering history.

K2 is attracting more and more mountaineering enthusiasts. Since 2008, 299 people climbed, dominating the K2 tough challenges. In the same period, 2600 individuals summited the popular but far easier mount Everest. With the improvement of equipment and facilities, climbing is becoming easier but the climbing challenge seekers would stay with and dominate K2, preferably.

The first woman to reach K2 summit was Wanda Rutkiewicz of Poland in 1986. The next four successful women, however, died while descending. A rumor of Mountain curse spread among women, but brave ladies broke this curse by successful summiting namely, in 2004 Edurne Pasaban, in 2006 Nives Meroi (Italy) and Yuka Komatsu (Japan), in 2007 Eun-Sun Oh, in 2008 Cecilie Skog and Mi-Sun Go became the 11th woman to reach the summit and descend safely.

Routes to the K2 Summit and difficulties mountain high elevation

Climbing explorers have experimented all the routes available to discover the easiest, but K2 is not prepared to concede fully. Some common difficulties exist on all routes. Oxygen becomes scarce by 30% at the peak causing fatigue. The mountain steeps require a committed effort when ascending or descending. These steeps also make a retreat in storms risky. The extreme storms continue for days and weeks at times without break. This causes supplies shortage, forced retreats, accidents, and deaths mostly on down way. All major routes are on Pakistan side, where base camp is located.

The climbers used oxygen very scarcely in the past. Since 2004 the trend to carry bottled oxygen has increased tremendously. Over 50% summiters used it. Still, acclimatization is a must for the high climb and to avoid high altitude sicknesses like ‘Hape’ and ‘Hace’. 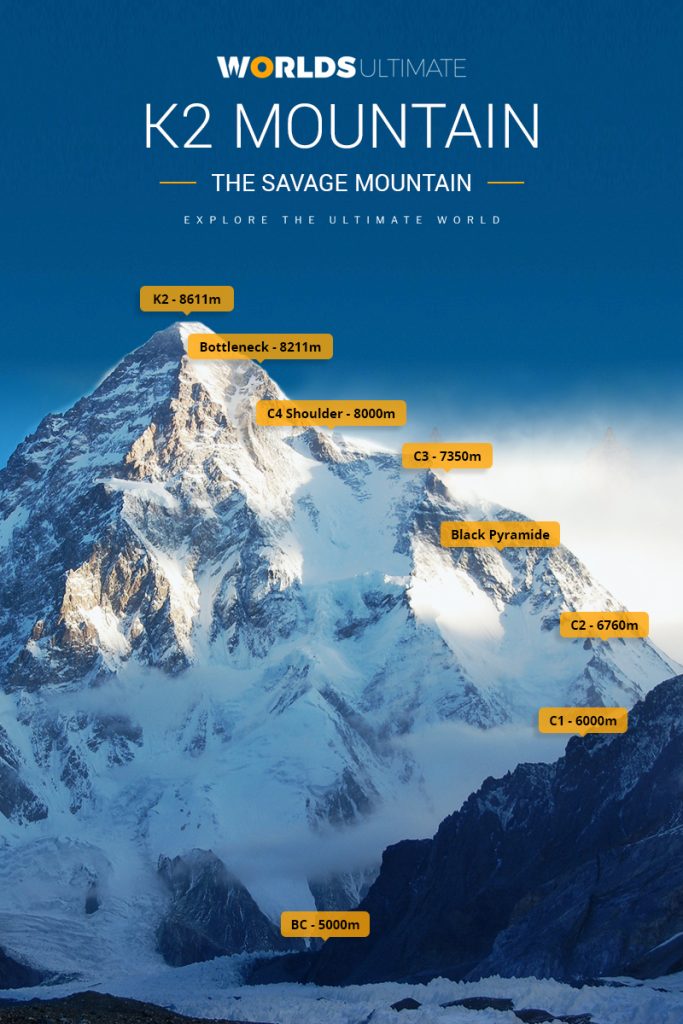 This route now is most common. This southeast Ridge was first used in 1909. It begins at 5000m. altitude. Climbers follow rock ribs, ice fields; climb two tough spots to “House’s Chimney” and “Black Pyramid”. Then difficult skiddy slopes are crossed to reach the “shoulder”. The last obstacle is the narrow “Bottleneck” or an ice cliff in the east of the summit. In 2008 a section of ice cliff snapped, broke the rope, killing climbers.

North Ridge: This is on the Chinese side opposite Abruzzi Spur. Few climbers choose this route as hazardous Shaksgam River has to be crossed. It ascends a tough long steep rock ridge that lands on the mountain “Camp IV, “Eagle’sNest” at 7900m. It crosses a dangerous hanging glacier and then to the summit.

West Ridge – Used in 1981South west Pillar or “Magic Line” First climbed in 1986 by Polish-Slovak trio. The only next successful climb was by spanish Jordi Corominas, despite many other attempts.

South Face or “Polish Line”– In 1986, Jerzy Kukuczka and Tadeusz Piotrowski summited on this route. This dangerous avalanche route is also called “Suicidal Route” as no one else even attempted it.

A safer alternative as it avoids the obstacle “Black Pyramid” It ends on Abruzzi Spur. First climber in 1994

Check out the movie about a successful K2 Mountain Expedition Directed by Franc Roddam Produced by Jonathan Taplin K2 (also known as) K2: The Ultimate High