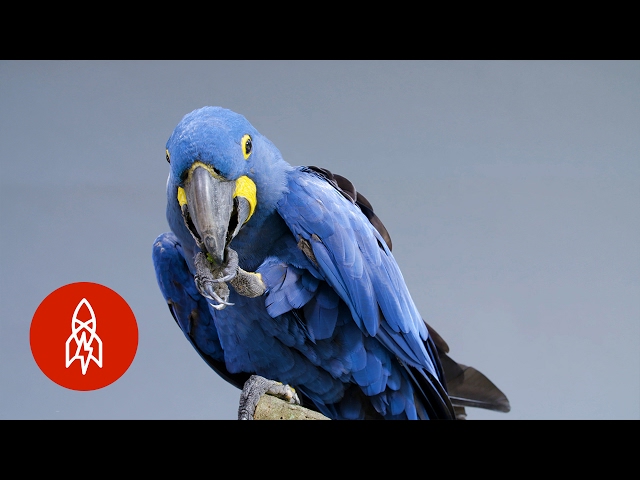 You must have heard about and probably seen a blue Macaw, either in the zoo or on TV or read about them in magazines.  These are one of the biggest colored species of the parrot family.  Dressed in bright blue features, they really look very attractive.

They have a yellow circling around their eyes and a solid black beak. These parrots are also referred to as Hyacinthine Macaw. It is their beautiful and brilliant vibrant plumage that makes them so lovable and attractive. These birds are kept as pets but can be challenging to live with as they are still wild animals.

Blue Macaws are native to central and eastern South America. They make their home in grasslands and forests of Pantanal region of South America that lies in the south of the Amazon River. They are also found in eastern Bolivia, southern Brazil, and northeastern Paraguay.

Looks and Appearance of Hyacinthine Macaws

The blue Macaw is about 3.3 ft long and weighs 1.2–1.7 kg. The feathers are bright blue, with a darker shade on its wings and lighter above. The tail is long and pointed and the beak is big and curved and black in color. Both male and female look identical and the juveniles too resemble the adults, except that they have shorter tails and have paler faces. Macaws have 4 toes that help them in climbing trees, perching on branches and holding food.

Macaws love eating nuts but they also eat fruits and vegetables. Their big and strong beaks are used for cracking open the nuts, seeds and even coconut and macadamia nuts. Hyacinth macaws need more fat in their diet as compared to other parrot species. They also enjoy eating berries, fruits, stems and flower apart from nuts. These birds also feed on insects and snails. Some species are also known to eat damp soil.

Blue Macaws are intelligent and social birds and often live together in flocks of 10 to 30. You can hear their loud calls and screams echoing through the forest. These parrots communicate within the flock, so as to help identify each other. They sleep on the trees at night and fly long distances during the day to find food. They also eat wet soil sometimes to neutralize their fruity diet. These birds are very intelligent and make use of their toes as tools to climb and grasp objects.

The clutch size of these parrots is one or two eggs but only one fledgling survives usually. The chicks are dependent on their parents for 6 months of age and after that, they leave the nest.

There are 18 species of Hyacinth Macaw but many of them are endangered. These colorful birds are illegally traded and domesticated like the blue and gold macaw , blue spix macaw and blue and yellow macaw. With the rainforests disappearing fast, some of the species are already extinct.

More than 10,000 birds are taken from the wild every year. Mechanized agriculture and cattle ranching is making their habitat shrink at an alarming rate.

Some of these regions are now unsuitable for macaw habitation.

The Blue Macaw is protected by law in Brazil and Bolivia under Hyacinth Macaw Project.

World Wildlife Fund and Minnesota Zoo are actively involved in these projects.

•    Blue macaws are sold for lots of money as they are highly prized as pets.
•    They are an endangered species due to hunting and trapping.
•    They are also hunted of those brilliant blue feathers.
•    The wingspan is more than 16 inches.
•    They can mimic humans.
•    The bird has only one mate and stays with it for life.
•    Can fly at 35 miles per hour.