The scientific name of Spixs macaw is Cyanopsitta spixii. Its common name begins with a capital letter because it’s derived from the name of a person, Johann Baptist von Spix. He was a German naturalist who hunted and collected one of the birds in Brazil in 1819.

Adding to it, the Spix’s macaw is categorised in the class Aves. It is placed in the order ‘Psittaciformes’, the family ‘Psittacidae’, and the subfamily ‘Arinae.’

The appearance of Spix’s macaw 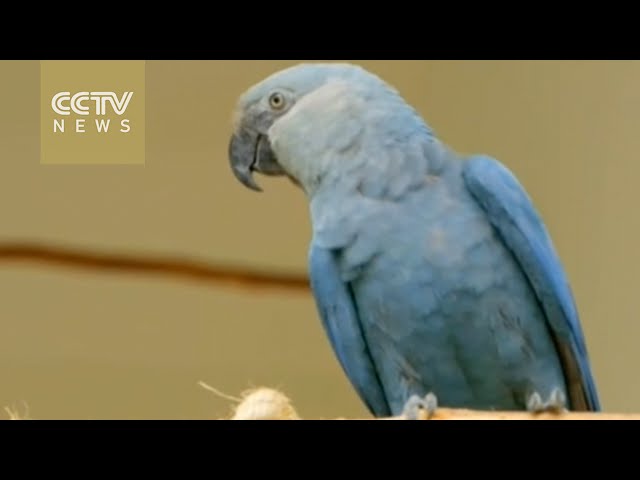 The head of Spix’s macaw is grey-blue with a grey-white patch of skin in front of and around each eye. The body is a shade of ashy blue. Not only the bird is smaller than most of the more vividly coloured and well-known macaws but also it has a more delicate appearance. It is sometimes known as the little blue macaw. Like other macaws, a Spixs macaw has a long tail with long wings and feet that grip well. Males and females are also about the same size.

These parrots were only found because of their harsh and loud voice “cra-a cra-a cra-a” or “kraa-aark” typically made during the flight. Their squawking calls were often heard throughout the woodlands and also make some screeching and repeated short grating noises.

The behaviour of Spix’s macaw

These parrots are mostly active during the daytime, spending the nights on the crabeiras along the streams. They are usually observed alone, in pairs or small family groups. Moreover, fly with slow, deep wing-beats accompanied by their typical kraa-ark calls.

They are generally shy and unapproachable but can become aggressive if they feel threatened. They mostly take off when an intruder reaches them and they use their loud calls and flapping wings to scare the competitors or predators away. However, they are extremely protective as when their eggs are in danger, Spix’s macaws have been observed lying on their side on the ground to draw attention away from the eggs, and instead, to themselves.

They are routine-oriented and maintain a strict schedule, performing their regular activities such as feeding, roosting, nesting, bathing, even social interactions at the same time every day.

The lifespan of Spix’s macaw in the wild is unknown; the only documented bird ( last wild male), was older than 20 years coupled with the eldest bird in captivity died at the age of 34. In general, it is 20 to 40 years.

Spix’s macaws were granivores (an animal that eats seeds as an essential part of the diet) and frugivores (an animal that feeds on fruits) in the wild, eating seeds from pinhao-brabo trees and favela trees, as well as fruit from fachiero cacti, pau-de-colher cacti and zizyphus joazeiro cacti. They sometimes ate from a local tree called ‘licuri palm.’ In captivity, these birds are usually fed a range of seeds, fruit and nuts, as well as important minerals and vitamins through small quantities of cactus meat and tree bark.

According to the captivity report of 2011, the numbers of registered captive Spix’s macaws have increased to 75.

Captive-bred Spix’s macaws reach sexual maturity at the age of 7. A paired female born at the Loro Parque Fundación laid eggs at the age of five, but these were infertile. Moreover, it is expected that late maturity in captivity maybe because of inbreeding and artificial environmental factors, as other parrots of the same size take two to four years to reach sexual maturity.

In the wild, mating involves feeding each other and flying together. Moreover, they make their nests in the hollows of large mature Caraibes trees and reuse the nest year after year.

The breeding season is November to March, with most eggs hatching in January to coincide with the start of the Caatinga January-April rainy season. In the wild, Spix’s were believed to lay three eggs per clutch. In captivity, the average number is four eggs and can range from one to seven.

They should be kept at temperatures above 20°C or 68°F.

The attached shelters requires Large planted flights. As they are heavy chewers, metal structures with strong mesh should be used. Furthermore, they enjoy chewing and need a regular supply of fresh branches and tree trumps. They need it for entertainment purpose as well as to trim their strong beaks. Since they are fond of bathing, water in small containers can be kept in their enclosures.

Inspiration for the “Rio” film

The animated film entitled “Rio” released in 2011 in the inspiration for Spix’s macaw. The word Rio in the title represents Rio de Janeiro. The plot also involves the plight of two birds. In the film, Blu is a male Spixs macaw who was captured in Brazil when young and is kept in Minnesota as a pet.