Scarlet macaws are inhibited to the tropical rainforest areas of Central and South America. Its preferred habitat is humid evergreen forests at elevations from about 1,000 to 3,000 feet. In the wild, it dwells mostly in the emergent and canopy layers of the trees.

This species has a very broad natural range, but it is threatened in many areas due to deforestation and illegal trapping for the pet trade. The scarlet macaw is on the Convention on International Trade in Endangered Species list, which forbids the commercial trade of wild birds.

The scientific name of Scarlet macaw is Ara macaw. They are classified in the class Aves. Moreover, it is placed in the order ‘Psittaciformes,’ the family ‘Psittacidae’ and the phylum ‘Chordata.’

The physical appearance of Scarlet macaw

This beautiful macaw has a creamy white, featherless face, with bright red plumage covering most of its body, wings and a long tail. Scintillating blue and yellow feathers also embellish their lower wings. Furthermore, the bird’s strong beak is adapted to breaking hard nuts found in the rainforest.

Scarlet Macaws has a deep and loud harsh call, ‘rrrr-aaaa’ that can carry a couple of kilometres, quieter at rest or feed with soft ‘raah’ calls. It can call a series of 3 to 9 continuous ‘rrrr-aaaa’ for a few seconds with brief pauses in between each call. Uniquely, these vocalizations are also used to identify their partners. When perching or flying in large flocks their calls could be very loud.  When feeding they have a soft constant series of ‘raah’ calls. 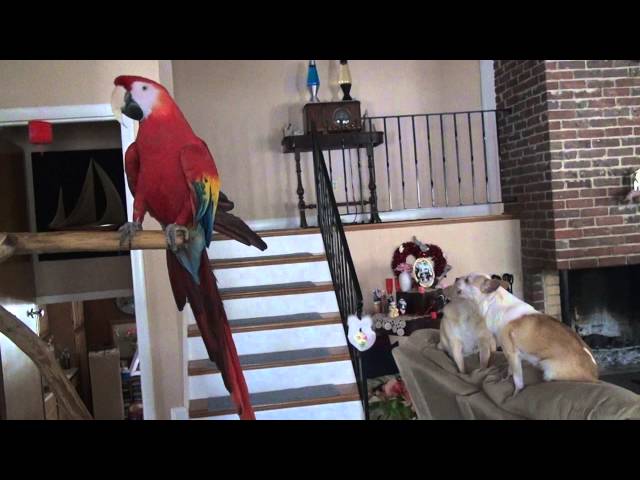 The behaviour of Scarlet macaws

Macaws are cordial; soon after gaining adulthood, they form pairs and join a flock of minimum 30 individuals and maximum 100. The flock members communicate with each other by a wide range of squeal, shriek and high-pitched sounds. Flocks are energetic and active during the day, and often fly long distances to search for food.

Scarlet macaws have a quiet simple life. Upon hatching from their eggs, life begins and so does the necessary parental care they need was to follow. Few weeks after birth, they are ready to fly and months after that, they have started selecting mates. The couple sticks with each other for their entire lives, once a mate is found. This means that they can live together for up to 60 years if none dies.

Scarlet macaws are omnivorous (feed on both plants and animals). The best diet for a macaw begins with formulated foods, a variety of seeds, dried fruits, and nuts. This basic diet provides them with plenty of fresh fruits and vegetables (high calcium greens such as kale and spinach) are especially important. Additionally, an all-seed diet is extremely unhealthy for these birds. Avoid chocolate and avocado (for all parrots), which are toxic.

Like most parrots, the female Scarlet macaw lays 2 to 4 white eggs usually in tree cavity where they incubate for about 5 weeks. The chicks fledge about 90 days after hatching and leave their parents a year later. Likewise, scarlet macaws become sexually mature at about 5 years of age.

Like other macaws, scarlet macaws are vulnerable to self-mutilation or feather plucking. Nutritional disorders, a variety of diseases, including Macaw Wasting Syndrome (digestive disorder or proventricular dilatation disease, which is due to a viral infection and macaws can be fatal), as well as overgrown beaks are some main issues in scarlet macaws.

The predominant threats to the scarlet macaw are habitat loss from rain-forest destruction and heavy manipulation for pet trading. In Costa Rica, these birds are frequently stolen from their nests and sold on the black market for $200. In the United States, baby birds smuggled into the country are sold for a maximum of $4,000.

Scarlet macaws are an endangered species due to habitat loss and per trade.

They had been decreasing in numbers due to a combination of factors, particularly hunting, poaching and the destruction of habitat through deforestation. Further, the spraying of pesticides by companies played a significant role in decreasing their populations.

To provide the suitable conditions to the Scarlet macaw, keep them in temperatures of 21-27°C (70-80°F).

The scarlet macaw is filled with energy, high intelligence and is a capable flee artist. It has distinct likes and dislikes, and can become a “one-person bird.” The beak is formidable and it can pack a wallop of a bite, so it’s not a great bird for children. In like manner, this is an easily trainable bird and can be taught complicated “tricks” if done gently and with patience.

Scarlet macaws are large birds and need plenty of space and time to play and stretch their muscles. By nature, these are active birds and providing the means to burn off that energy is crucial. A scarlet macaw should be allowed outside of the cage for at least two hours a day and should also be given ample chew toys to help it exercise the powerful beak and jaws. 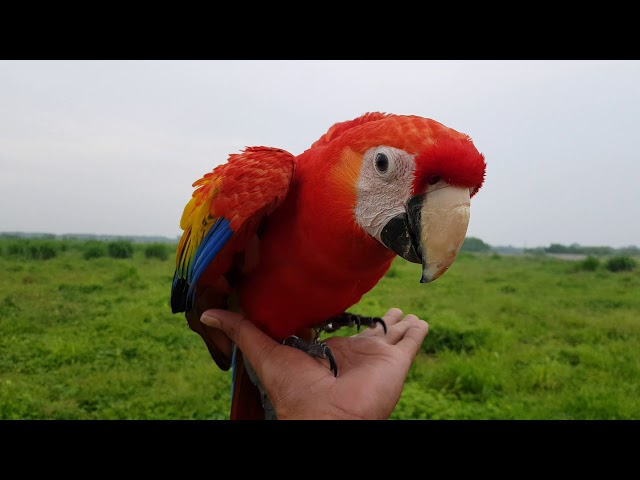