Today I will discuss another family member of Macaws named as Blue and Gold Macaw also known as Blue and Yellow Macaw. It is one of the six genera of Central and South American Macaws.

Blue and Gold Macaw’s physical appearance is self-evident by their name, with brilliant blue upper part of the body, golden yellow underparts, the forehead is green as well as green tips on the end of their wings. They have black beak strong enough to crush nutshells and also helpful when climbing the trees. Their face is white with small black feathers which change into pink color while they excited. They also have a small patch of dark blue to black feathers under the beak. They have dark grey to black zygodactylous feet (two toes facing forward and two backward) help to hold tree branches firmly while moving around the tree.

Blue and Gold Macaw generally weight between 0.9 to 1.8kg and measure about 30 to 34 inches long starting from the tip of its head to the end of its tail, so more than half of which is tail. They have a wingspan of 41 to 45 inches. Males and females are alike so it’s really hard to differentiate. Some suggest clues but they are not authentic and still prefer to do DNA test for identification.

Most of the resources show that Blue and Gold Macaw can live up to 30 to 35years in the wildlife but it can extend up to 50 to 60 years when kept as a pet in the home because there is no threat to their life from predators. 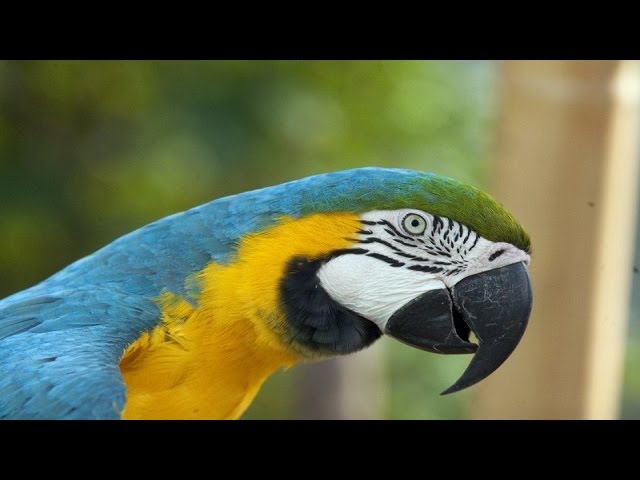 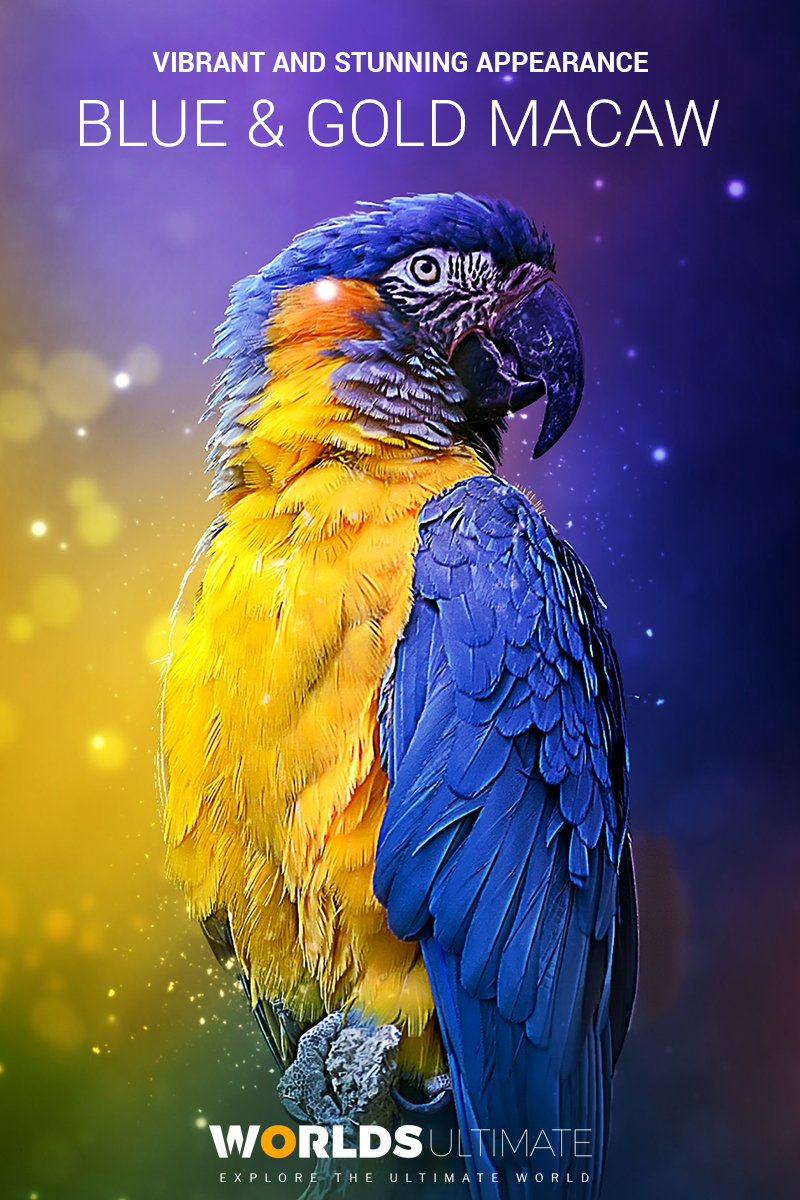 Blue and Gold Macaw can be found in subtropical and tropical forest, native to Central and South America where they live in woodland and savannah. This species range from Venezuela to Brazil, Bolivia, Columbia, Peru, Paraguay, Previously they range in Trinidad too but in 1970 they were completely wiped out due to human activities. They build their nest at height in dead palm trees to avoid predation.

Blue and Gold Macaw are at least concern in IUCN red list of threatened species, but their population starts declining. The decline is not so rapid to reach a vulnerable status. Research shows that the adult Blue and Gold Macaw are greater than 10,000 and the dwindling is less than 10% over the past 10 years. Although they declared as uncommon species and suspect a loss in habitat over next three generation due to deforestation and capturing from wildlife to keep as a pet in the home.

Blue and Gold Macaw are spectacular, intelligent plus their vibrant colors with large size project commanding presence. Their ability of mimic words and socializing makes them more attractive to human and build a strong bonding with the owner if looked after well. They require much more attention from the owner as compare to the traditional pets such as cat and dog. As it mentioned before that they are quite large in size so a large cage is required for them otherwise they will ruin the feathers of their tail. They are very active parrots so need to leave them outside the cage for several hours for playtime and stretch their muscles. They may require bath on daily basis depending on the weather conditions. Strong toys must be provided for chewing to keep their jaw muscles healthy. It is preferable to keep them in a highly interactive area in the house so they can intermingle with family members.

In wildlife, Blue and Gold Macaw’s usually consume various seed, nuts, and fruits. They are a big fan of palm fruits, but also love to have seasonal vegetables. They eat clay and minerals on the riverbank like Blue Macaw and other Macaws which helps them to digest the poison they intake while eating some toxic plants.

Captive Blue and Gold Macaw should be offered varied diet same as wild once. Seeds and nuts are rich food so avoid to give them as they don’t fly far to hunt for their food. Besides that, there is some pellet mix available for healthy consumption. They may like to share some food from you, so feel free to give them your own food as long as it is healthy such as fruits and vegetables.

As we all know, Blue and Gold macaw are quite large in size so they require large enclosures. An outdoor aviary is recommended because their feather requires natural sunlight to remain healthy. If they kept indoor make sure their cage should be in the place where the sunlight can come. Size of the cage also depends on the amount of time they going to spend during the daytime. The material involves in building an aviary should be strong enough to stand against the weather and the strong beak of Macaws. Different designs of aviaries are available to suit different circumstances.

Blue and Gold Macaws are quite messy and destructive. Good hygiene practice should be maintained to provide them a healthy life. The aviary should be clean on regular basis and old food shouldn’t be pilling up in the cage, on perches. Wash the food and water dishes daily and provide them fresh water regularly.

By practicing to keep the bird’s environment clean we can reduce the chance of developing a fungal infection and viral diseases.

In wildlife Blue and Gold Macaw are generally found in pairs, family groups or in small flocks range between 20 to 25 birds. They fly together in a flock in a quest for food and can be seen peacefully with each other. They don’t have a leader to lead a group so they all are equal and just move around together especially the paired parrot fly very close together touching their wings to their partners

Blue and Gold Macaws are sweet and perform very well as a pet if raised properly. The owner should have detail information about their behavior before taking a decision to have them as a pet because we all know that they love to live in groups and also very affectionate so they require a lot of attention from their owners. 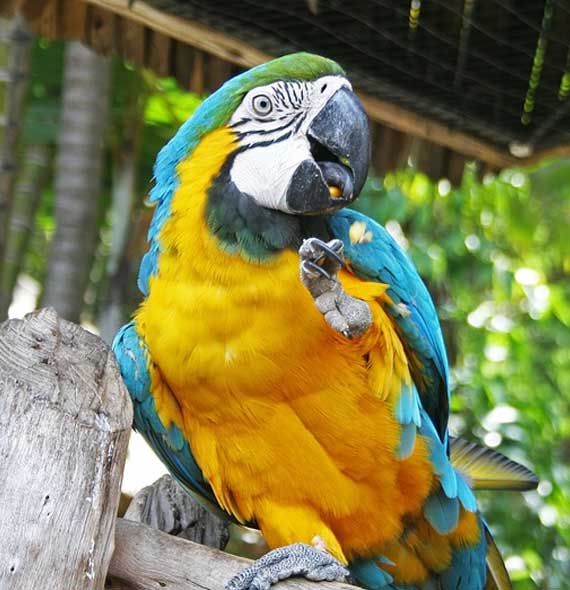 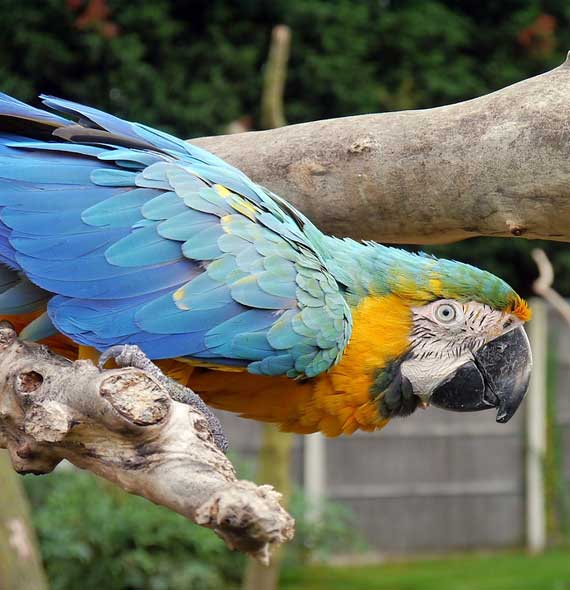 Research shows that Blue and Gold Macaw is a friendliest companion. But as we all know that there are always some positive and negative characteristics so the owner should consider some features of their natural behavior before keeping them as a pet. It is true that they are very intelligent. They can easily learn 15 to 20 words and love to chatter which means they are quite loud. In addition to speaking whole day, they can scream too when they are not in good mood and it’s being observed that the screaming get louder at sunset time. Once they came to know that while screaming they can easily grab your attention, they will make a habit.

Biting and chewing is also a natural behavior which can be tamed with affection and training. As soon as the young once out of their baby stage will start exploring their beak. If their nipping is not properly looked after, a high risk of developing a bitting habit into a potential problem. They are incredible chewer so if you leave them alone at home you will find lots of destruction on your arrival. Develop a habit of putting them in a cage while they are alone at home and also provide them with toys and another thing to chew on. Keep an eye while you are at home and redirect them to chew the suitable toys if you see them chewing on furniture. They also have an issue of plucking their own feather which they usually do when they are bored or something bothering them. It is preferable to take them to the veterinarian for an examination to maintain their health.

Blue and Gold Macaw are monogamous species mean they believe in lifetime commitment so once they pair up they stay together however they might replace the mate once they lost. They reach to sexual maturity at the age of 3 to 4 years. Their mating season starts in January and ends up by June and they usually breed about every 1 to 2 years.

Blue and Gold Macaws build their nests in cavities and holes quite high from the ground. Female, in general, lays 2 to 3 eggs and she incubates them approximately 25 to 28 days whereas father hunt and brings back food to the nest during the period of incubation. Chick hatch blind with pink skin and no feathers. Among all only one chick will be dominant and survive and the rest died due to starvation. Mother will stay close to keep them comfortable till they develop their feathers for warmth and protection. The hatchling weighs about 14 to 20g and they develop feathers after 10 days. Parents are very protective about their young once. Chicks able to leave the nest independently within 3 to 4 months times when they are old enough to feed themselves. Once they reach maturity, make the pair and build up the nest to repeat the life cycle.

Blue and Gold Macaw are quite popular as a pet due to their eye-catching appearance and talking ability. There is no doubt that they are one of the friendliest and intelligent companion parrots but the owner needs to work hard to get the best out of them.

Once you bring them home give some time to settle down with a new environment and also to get used of your family members. This can be done with little bit training of spending 2 to 3 minutes with them on daily basis by each family member and offer a small treat. While training them, make sure to be patient and consistent and try to build a trust. Never hit them as you going to break their trust. Train them in session and it should not be longer than 15 to 20 minutes.

Blue and Gold Macaws are the most common choice among people to bring them into their homes. It is not hard to find them because they breed very well in captivity so that’s why they are available in the market direct from a breeder.

The macaws lose nearly a quarter of their eggs to predators, including Purplish Jays, White-eared Possums, Coatis, Eagles and Human hunts

How long does a blue and gold macaw live?

Blue and Gold Macaw live between 30 and 35 years in the wild. As pets or at zoos, these birds can live upwards of 50 years.

What is the diet of a blue and gold macaw?

Are the blue and gold macaw endangered? 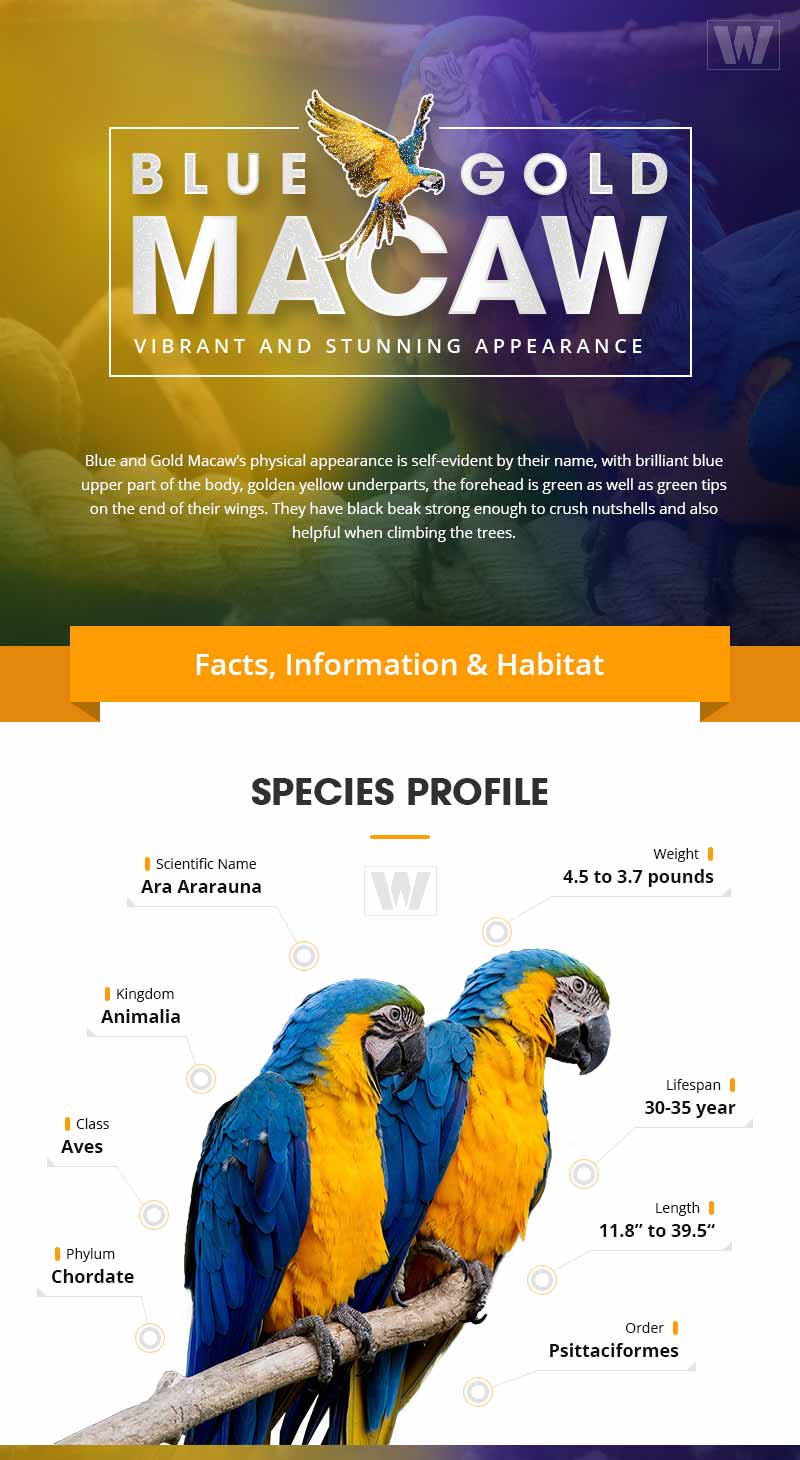 Embed Blue and Gold Macaw Infographic on your Blog!
Just Copy and Paste Below code!

One Reply to “Blue and Gold Macaw: Vibrant and Stunning Appearance”