The icon renewed the iconic Shelby Mustang received its 2010 upgrades…Shelby American sponsors the Opening Night at Barrett-Jackson Gala to celebrate the 45th anniversary of the original 1965 Mustang Shelby gt350 and the launch of 2010 GT350 Mustang.

The very first Shelby Mustang back in 1965 was Mustang Shelby gt350. And that was the very first time when somebody put America’s pony car on steroids. The unique and powerful body design also makes it one of the best drift cars. The name was brought back and off the scenes for the 2011 model year but the current model has been back since 2016. The 2019 model focuses more on performance such as longing for the racetrack more than a casual dash between stop lights. These are all inherited from the original Shelby. This inherited DNA make it one of the best drift cars.

There aren’t as such revolutionary changes for the 2019 model of Mustang Shelby gt350, but there have been some notable upgrades in the name of performance. Moreover, the car is reportedly more aerodynamic than old models. And this aerodynamic shape provides more down-force with the available Gurney flap installed. There are also new Michelin Pilot Sport Cup 2 tires which are developed exclusively for this car. The sticky rubber, combined with tweaks to the chassis and braking system. This new addition of style would make the car noticeably nimbler than the 2018 model. The GT350 R model, meanwhile, still has a larger rear wing and sheds weight for the sake of more speed. However, a standard Mustang GT is already more than enough cars for most people. 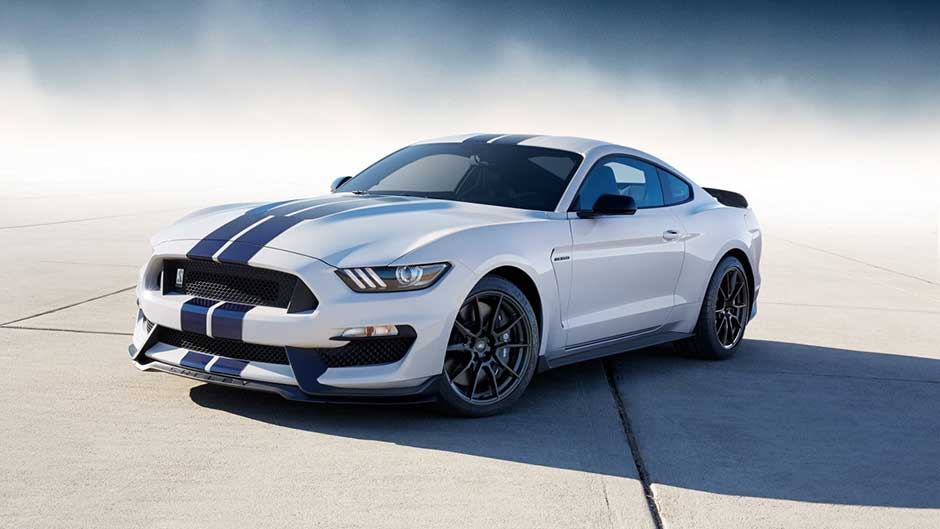 The GT350 R brings the weight down by another 100 pounds for even quicker tears around the track. But the GT350 is incredibly quick. The good news for Mustang’s lover is that there are two new paint colors Velocity Blue and Ford Performance Blue added to the list.

Brakes are also no more cross-drilled. High-revving, sonorous V8 engine gives the car a serious race-car character. Besides these, there are some advanced touches of technology such as Wi-Fi-hotspot, premium audio system, retuned stability control, and power steering.

Mustang Shelby gt350 is designed to achieve best and lightning-fast performance. Each of the components is optimized in such a way that whole body parts work in harmony. Moreover, Aluminum hats are used in rotors to reduce overall weight. This model is the most exhilarating experience during the production of Mustang.

2019 Ford Shelby’s engine is totally hand assembled with the flat-plane crankshaft. It is one of the most naturally aspirated road going engine ever made by Ford. Therefore, it is also the highest revving with the red line of 8,250 rpm.

This manual transmission is quite strong and light to handle an extremely high-speed engine. As well as, it helps to handle the rigors of long and brutal track duty. The transmission also provides the kind of precision engagement, reduction in weight, and smoothness. Balancing of inertia is possible through this.

Highly engineered brakes halt down the Shelby Mustang in hurry. This is done by the smoothness of front and rear calipers. The rotors are designed to minimize the braking heat on track. The rear rotors measure 380mm (14.9 inches) and in front 394mm (15.5 inches).

Ford worked with Michelin to redesign the tread pattern and compound of the Pilot Sport Cup 2 tires to take full advantage of these higher speeds. Ford claims better grip, improved linear and lateral acceleration times, and shorter braking distances with these tires. Moreover, they also aided in part by revised antilock braking tuning. Underneath, Ford also updated the suspension with recalibrated springs and revised damping to accommodate these higher thresholds.

The extra money spent on a Mustang Shelby gt350 is well apparent in the interior. The instrument panel has handsome aluminum trim. As well as an exposed carbon fiber version of the instrument panel is also available. The door panels have accent stitching and the seats are well-bolstered and purposeful-looking Recaros. Although drivers will need to pay extra for power-adjusted seats. You’ll mostly want to listen to the engine when driving a GT350. There is a 22-speaker Harman stereo when things get more casual. Ford’s Sync 3 infotainment system is centered on the 8.0-inch touchscreen in the middle of the dash. Other standard features are also included such as dual-zone automatic temperature control and a universal garage door opener.

The Mustang Shelby gt350 is a lot stiffer than a standard Mustang. But in crash testing, the regular Ford-badged car already does reasonably well. It scores five out of five stars in all tests in federal testing. And it received all top Good scores with the Insurance Institute for Highway Safety (IIHS) in 2018. Besides from an Acceptable rating in the tricky small overlap test. A reversing camera is standard but even without it, the rear visibility is reasonable. Any Mustang is far superior to the visibility in the Camaro. The GT350 is a much more poised and controllable version of the Mustang than the run of the mill version that you see spinning out leaving Cars & Coffee.