Classification of Are (Chestnut-Fronted) Macaw

The scientific name of Chestnut-fronted macaw is Ara Severus. They are classified in the class Aves. Moreover, it is placed in the order ‘Psittaciformes,’ the family ‘Psittacidae’ and the phylum ‘Chordata.’ 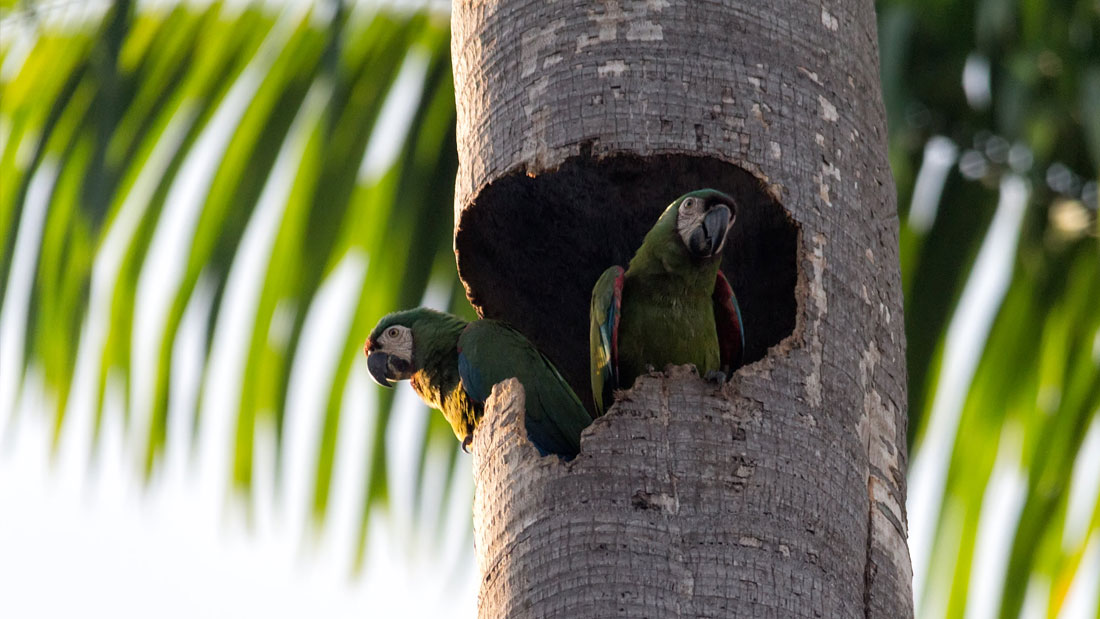 The severe macaw is distributed in southern Central America and northern South America. Particularly well-known in Panama and Bolivia. They are also found in Brazil, where they are known as the Brazilian green macaw. Their habitat is Woodland, Savannah, and forest.

The physical appearance of Severe Macaw

Severe macaws are shimmery green with dark, chestnut-coloured patches on the forehead and under the beaks. The crown of their head boasts a patch of scintillating blue feathers, and they bear distinctive red patches on the edges of their wings. The tail feathers are blue with red undersides, which shine when they are in flight.

Moreover, this species exhibits the classic bare macaw facial patch. They also have dark feather fine lines circling the eyes. Also, the bird’s beak and feet are gray and the iris of their eyes is resplendent yellow-gold. As Severe macaws are monomorphic, as a result, the males and females are identical.

The behaviour of Brazilian Green Macaw

Brazilian green macaw is social, friendly and is classified in mini macaws. These Severe (Chestnut-Fronted) Macaws (mini) are an intelligent plus, demands attention. But prove to be a typical macaw and can be cranky at times preferring only one person or gender. Surprisingly, a Severe Macaw can talk with clarity and most do pickup large vocabulary. Check out below video of 15-year-old severe macaw Talking. 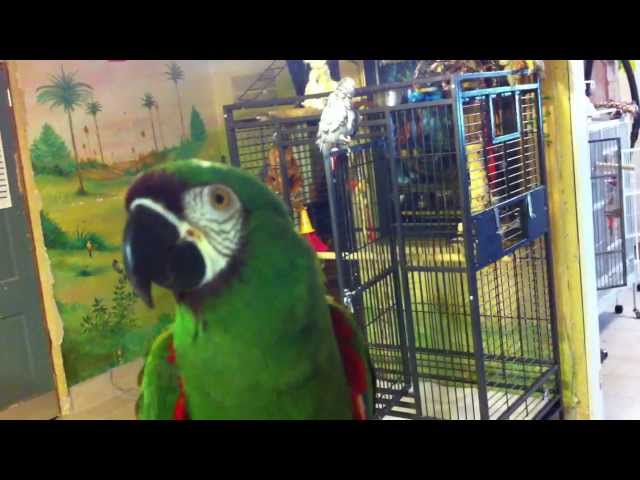 How to recognize their situation through their behaviours?

When Severe macaws are:

Never yell at the bird when it makes too much noise because it only makes the situation worse.

Through visual observation, their sex cannot be identified. The only reliable way of determining is through DNA testing or examination with an endoscope. The males tend to be more astronomically immense, have a voluminous skull, and are much more aggressive when breeding. This can be a denotement that you may have a male on your hands, but it’s not necessarily so.

A hand raised chestnut fronted macaw is an inspiring bird, always having an affinity towards interacting with its owner. A trained macaw can sit on your shoulder, giving you the best company ever. Although they shout a lot, some of them are able to speak fluently.

Are severe macaws must have adequate nutrition to thrive. Feed them with a varied diet consisting of high-quality seed and pellet mix. The bird will also benefit daily offerings of fresh fruits and vegetables as in the wild they eat all kinds of foods.

The usual clutch consists of 2-3 eggs which incubate for about 26 days. The babies fledge from the nest after 3 months. Feed the parents with green stuff, corn-on-the-cob, carrots, and fruit laced with food supplements while they are taking care of the youngsters.

The IUCN red-list declared Chestnut-fronted macaw as a stable population with the status of least concern.

To provide suitable conditions to the Chestnut-fronted macaw, keep them in moderate temperatures.

Are Severe Macaw as Pets

According to the personality, these birds are fantastic and social at an early age. Coupled with this, any jewelry or shiny objects will quickly amaze this curious parrot so these things should be kept away from their reach.

Most Severe Macaws form monogamous bonds with their family and do not do well if kept isolated, even become neurotic if their mental needs are not met. Furthermore, gauge your bird to see what works best. These birds do enjoy being petted alongside the back of their necks, along with their beaks, or around their eyes.

Severe macaws are for muscle power. In the wild, These macaws fly several hundred miles a day looking for food. Because of this, it is important to provide enough exercise for your pet to maintain a healthy body.

Pet severe macaws should be allowed a minimum of two to four hours playtime outside of their cage each day which allows the bird to stretch its muscles and exercise its wings and beak.

For the refreshment of macaw, provide a steel cage outside the house of 128 ft with some perches so that your macaw can completely expand its wings and move easily. For mental stimulation and enrichment, it requires some chewable toys.