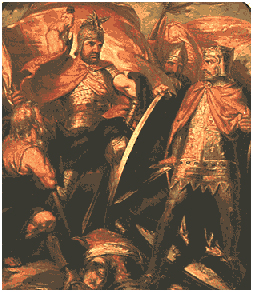 Born: 1270 in Elderslie in Ayshire, Scotland.
Death: 1305 23rd August–Executed/Martard.
Father: Sir Malcolm Wallace, Scottish Knight and landowner.
Physic: He was 6-1/2 ft tall powerful man, a well-proportioned body, beautiful features with brownish hair and piercing bright eyes.
Talents: From childhood intended to become a priest. Sir William Wallace also learns the Marshall arts as usual of the time, including swordsmanship and horsemanship. With a huge stature, he was very agile and swift. Sir William Wallace was the greatest successful hero Scotland ever produced. The long active struggle for independence of Scotland was lead to a winning point by his sole initiative. His life fell short by a year to see final victory of the resistance struggle.

The historic records on Wallace are scarce and incorrect. The English writers were actually prejudiced to record his heroic deeds, Wallace being their enemy. The details available come from a non-English Blind Harry (minstrel) and others. Wallace was born in 1270 in the peaceful reign of Alexander-III when economic stability and prosperity were rampant and all English claims of suzerainty were brushed aside by him. In 1272 king Edward I succeeded the throne of England. In 1286 Alexander died leaving his four-year-old grand-daughter, Margaret, as the only survivor to become Queen of Scotland. So an interim four claim guardian Government was formed.

King Edward, seeing instability in Scotland, confirmed to the guardians that his son, heir Edward of Carnarvon, would marry Margaret while preserving Scotland as a separate nation. However, Margaret fell ill and died when 8 years old in 1290 — thus starting race for the throne. The Scottish Lords could not decide and approached kind Edward to arbitrate. In 1292 he appointed John de Balliol as king, authorized to chose half members of the Government and Robert de Bruce as an heir, also authorized to chose half members of the Government. Actually, Edward wanted a tough person to manipulate the system. This became clear when he later demanded three castles on the border and Scottish forces to fight the French. However, Balliol refused to invite Edwards wrath and war.

Scotland in times of Alexander III was dominated by English people and forces who had build fortified camps and garrisons. The Scot civilians suffered a lot of abuses, brutality and were at their mercy. There was no rule of law for protection. In 1291 Wallace’s father was killed by English forces. This infuriated Wallace and he committed to fighting for independence. He converted into a warrior attacking soldiers and was declared an outlaw. He tactfully killed English mercilessly. He was a powerful swordsman, an unrivaled archer and his blows were fatal. 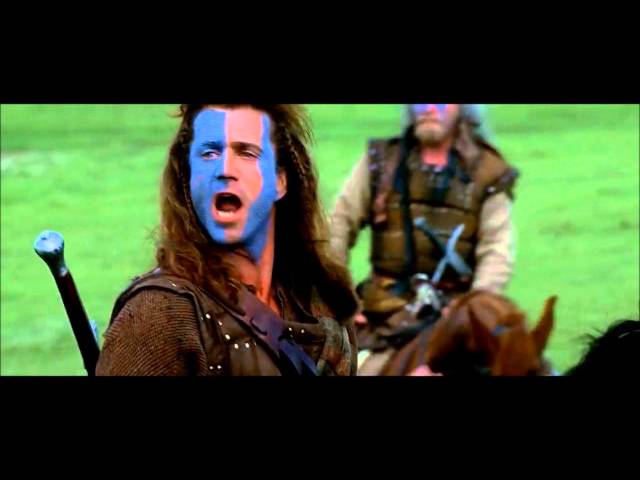 The best movie ever produced on his War of Freedom for Scotland, “Braveheart”

England was at war with France. A ceasefire treaty was signed in 1295. Thus freed, Edward conquered Scotland in 1297, imprisoned John Balliol and declared himself ruler of Scotland. He also took Stone of Destiny (Scottish coronation stone) to London.

Sir William Wallace was constantly attacking and gaining strength and popularity. In 1297 he killed king’s Knight to avenge his father’s death. Thereafter with more men, he planned to attack Sterling Castle, a stronghold of strategic importance to England having huge force. He lured the English to cross the sterling bridge and slaughtered them, killing over 5000. An important victory. He also ravaged two counties in Northern England. In 1297 Wallace was proclaimed Knight and guardian of Scotland.

Edward returned from France in 1298 and again invaded Scotland to crush Wallace with 90,000 troops. He killed 10,000 Scots. Sir William Wallace retreated in the woods after appointing Robert de Bruce as State Guardian. Edward again chased Wallace in 1304. In 1305 Wallace was betrayed by a Scot knight and was captured. Edward satisfied his anger by executing Wallace and dragging him behind a horse while still alive, then cutting him in 4 pieces and hanging each piece at different bridges of England. Edward thought such a fate of Wallace would break the spirit of Scots. Instead, he set fire to Scottish determination for freedom. Robert de Bruce immediately re-organized rebellion. Edward moved again to conquer but died on the way near Carlisle.

Scotland was declared independent and Robert de Bruce was Crowned King of Scotland in 1306.

Statues commemorating Sir William Wallace were erected in the 19th century in many places. In 1869 a 220ft high National Wallace Monument was erected on the hill near Sterling Bridge, site of the decisive Scot battles. His sword, still in good condition, is placed in this monument.

BBC conducted a UK poll in 2002 in which Wallace ranked No. 48th of 100 greatest Britons. G. A. Henry wrote a Novel in 1885 titled “In Freedom’s Cause”, on Wallace and others. Nigel Tranter’s book “The Wallace” published in 1975 reveals more accurate deeds than previous ones. A film was also produced in 1995 on William Wallace’s life named “Braveheart” is probably the best. This was written by Randall Wallace, winning 5 Academy Awards, including Best Picture and Best Director Awards.
[nggallery id=1]