God created life in various forms to house the Planet EARTH. He planned, furnished and decorated it well. To suit the needs of all the living beings for all times. All these living forms, including humans, exist in abundance. And cannot overwhelm each other. By a balance maintained by unseen natural laws and forces. This unique life structure is indeed very complex. All creatures are made interdependent. They support the livelihood of the hunter and the hunted, thus controlling the growth of every species to avoid over-crowding.

Humans have been created with a unique DIFFERENTIATING FACTOR with super qualities, from the animals in general. Only humans can Think, Plan surroundings and Improve or Change their lifestyles to look NEW from the original setup. They have also been bestowed with a far improved sense of speech to convey thoughts and to communicate with others. They made specific sounds that were copied by others to repeat the same message. 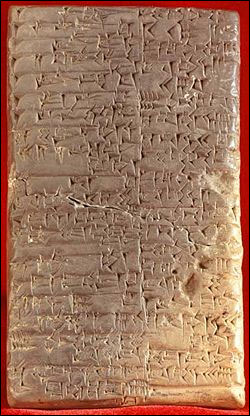 This unwritten first vocabulary increased over long periods by the whole group living together and latterly adopted by the adjoining communities over larger areas, through unconscious intimate counseling. This is considered an early crude form of Speech and a means of contact totally unlike animals. In the 20th.century Charles Sanders Peirce named this conversion as ‘SEMIOSES’ while Roman Jacobson terms it a process of ‘Coding and Encoding of information’. Some experts link the sounds with ‘reasoning’ but some argue that ‘logic and reasoning’ were recognized much later. However, all the authors agree that these specific sounds adopted, to represent a feeling, thing or animal was a result of mutual understanding within a society, like today’s conventions that are beyond individual interference.

ADAM (PBUH) descended from Heavens and roamed freely everywhere reaching all the corners of the earth, as the theories state. He settled his off-spring, MANKIND, where ever he went. This created independent and completely isolated pockets of the human race groups. The natural result of this huge spread of starlet individual colonies covering the planet was that today we hear hundreds of different languages, lifestyles and living habits. By contrast, people of faraway regions are easily recognized by their physical, facial and physic differences. Their speech sounds and languages are varied beyond any doubt. Similar sounds carry new meanings in various regions.

Speech development continued with the introduction of new ways to remember. And teach the sounds to the young by the then experts Ancient Grammarians. This led to correlating sounds to written symbol or symbols put together to form one word or sentence. This conversion from Sound to Symbol was the initial form of written Language. When we observe the symbol pattern forming a language. They also differ in entirety when conveying the same meaning in different countries. The alphabets do not resemble when we compare Russian, Chinese, English, Hindi, Urdu, Greek and Arabic languages, to mention a few. As time passed, these all continued to develop in their own styles. The introduction of grammar made the messages clear and precise, avoiding dual meanings. The Indian grammarian Panini became active as early as 5th.

Century BC introducing nearly 4000 rules in the Sanskrit while the Tamil Tolkappiyar did equal hard-work in the 2nd.Century, BC. The Arabic linguist, Sibawayh, performed this extremely professional feat in 760 AD in the Middle East. The western linguists realized such a need of articulatory phonetics, like verbs, commas, adjectives, etc. for a language much latter. In the 16th to the 18th century, the Sanskrit literature inspired the scholars and educators like Roger Ascham, Wolfgang Ratke, John Amos Comenius, William Jones, Friedrich Schlegel, Franz Bopp, and others. The most reputed in this respect is the author of ‘Deutsche Grammatik’ (great scientific linguistic works), Jacob Grimm.

All the other animal creatures live, reproduce, eat, sleep, dominate others, hunt and are hunted. Moreover, they also die the same way they did thousands and millions of years ago. They exhibit limited rigid intelligence that governs their lives. We observe that animals change/adopt eating habits in the scarcity of food or when tamed and trained. They follow limited human commands with a risk to revert to original aggressiveness at any moment. Living among humans does not mean they will learn to talk or wear clothes like them.

An Ultimate Gift and Blessing

God has blessed only humans with the ULTIMATE MIND. It can think ‘changes’, read between the lines to ponder for solutions, create innovations and forecast the near future for safety and progress. Aristotle believed that speech and language were always within the intrinsic nature of man. A God gifted instinct built in human philosophy. And also politic just like senses of good and evil. The Devine Holy Scriptures’ believers are firmed when the devil misguided ADAM. God descended him on earth, very confused and distressed, not knowing what to do. God Himself taught him how to seek pardon. And after an earnest prayer his sin Condon. This is proof enough that Adam possessed the ability to speak and his children definitely inherited it.

Thomas Hobbs and others stand by Aristotle to declare that speech and language is a part of human nature. And a pre-requisite for social living where contact, communication, contract, and discussion are also a must. But most are convinced that learning became possible in response to an initial impulse infused by God. Moreover, he also taught the names of all the creatures that Adam came across. However, the numbers, colors, figures, and measures, etc. apprehended much latter by the ‘NEED’, the mother of all innovations.

The average readers should know that the formation of words and their derivatives. And these are also going through long scrutiny. And selection process including grammar that we see today. The linguistic experts have now divided the communication process under various headings. Each is for a specific use, utility and simplicity.

One Reply to “LANGUAGE – The Differentiating FACTOR”