The expiatory church of La Sagrada Familia has since become a sign of identity of Barcelona, Spain. In fact, it is promoted by peoples’ will. And it is also inspiring religious beliefs. 125 years have passed and construction is still going on at a slow pace. Moreover, it is expected to complete in the early 21st century. Beside this, there are many more places to see in Barcelona without spending the dime.

La Sagrada Familia is a private expiatory under construction church. The sacred place dedicated to the Holy Family. It is managed by an ecclesiastical foundation. That controls budgets and building project in accordance with guidelines of Antoni Gaudi. 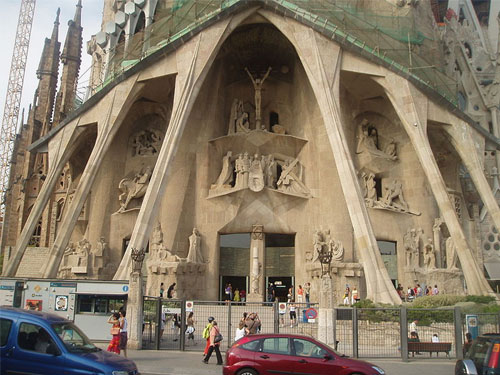 The private casual funds generate from donatives admission fee paid by about 3 million visitors every year. They come to appreciate and study architectural and religious aspects. Gaudi’s works depict symbolic Christianity all over. He displays faith Jesus and Virgin Mary. The Apostles, Evangelists, and Saints in an appropriate mode. The suggestive symbolizing architecture and carvings around the church interior and in 18 bell towers.

The La Sagrada Familia in numbers:

Josep Maria Bocebella Verguer founded the Spiritual Association of Devotees of Saint Joseph in 1866. They decided to construct an expiatory church dedicated to the Holy Family in 1874. Generous donations were received and a plot measuring 12’800 sqm was bought in 1881 in the center of Barcelona city. The foundation stone was laid on 19th March 1882 (on Saint Joseph Feast) by the Bishop of Barcelona. The building initiated with Neo-Gothic design representing crypt beneath the apse by the architect Francisco de Paula Villar. However, early disagreements made him resign and Antoni Gaudi took charge.

Antoni Gaudi was an outstanding figure of Catalan Culture. He is also well known in International Architectural circles for creating very lively works and landscapes that appeal to human senses.

Gaudi received an anonymous large donation in around 1890. He then aspired to scrap the present plan and redesign. He built a huge monumental structure incorporating better innovations, high towers, and sophisticated detailed sculpture formations to explain the teachings of Gospels. In 1882 he laid foundations of Nativity façade. Moreover, he completed the apse façade in 1894 and the Roser door of Nativity Cloister in 1899. 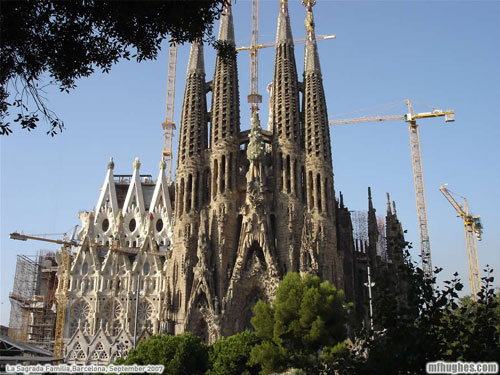 He also built Temporary schools for children of workers of La Sagrada Familia. Nativity Façade model was displayed in 1910 in Paris at Grand Palais, by Eusebi Guell. The work commenced in 1882 using old means. Gaudi sensed the task difficulties and deviated from traditions. He adopted modern techniques to speed up work and create better quality. He had railway track laid suitable for small wagons for easy transport of materials. Employed cranes and built workshops at the site for convenience. He replaced manual tools by electric machines and gadgets for finer workmanship.

Important Working Over the Years:

2000: The Central Nave Vaults were completed. Work began on Glory Façade foundations. A mass was held inside the church so that the people could view the Grandeur and spread of detailed craftsmanship.

2002: International Gaudi year and his 150th birth anniversary were celebrated by Barcelona Council. La Sagrada Familia participated fully by commissioning Temporary schools and holding a show “Night of Light and Fire” on 1st June. Special Illuminations and a memorable Castle of fireworks was the main highlight of this event. The wall of prophets and patriarchs are located in the Passion Façade was completed by Josep Maria.

2005: The Eucharistic symbols of bread and wine sculptured by a Japanese Etsuro Sotoo. These were placed in the Central Nave window. Ascension sculpture was placed between Façade Towers.

2008-10: The Vaults of apse and crossing are completed so that the Central Lantern Tower could be finished. This Lantern will be crowned by a 170m high cross. It is dedicated to the Virgin Mary. Four more towers, dedicated to evangelists will surround central tower.

Construction of the main Façade will complete the Church La Sagrada Familia.

Gaudí was aware that the construction of the Sagrada Familia would last for centuries. That is why he proposed to focus on the front of the church. He wanted the generation that had begun the work to be able to enjoy a form of completion. As well as inspire future generations to continue the construction of a project that had begun before their time.

Gaudí tried to define the Sagrada Familia’s construction. But he only completed detailed plans for the three of the most important parts. Such as the central nave, the sacristy, and the facade of Glory. Moreover, these three plans have been used to inspire further construction. And these are also including that of other naves and central towers.

As its name suggests, The Nativity facade symbolizes the birth of Jesus. It was built between 1894 and 1930. Moreover, it is the only facade to be built almost to completion while Gaudí was alive. As a representation of nativity, Gaudí saw the facade as a symbol of life and creation. Therefore, he introduced its exuberant ornamentation, including animals and tools mixed with symbols, such as the Tree of Life.

The facade has three entries that represent the theological virtues. Hope to the left, Faith to the right and Charity at the center. These are along with the Door of Jesus and the Tree of Life. The facade culminates with four bell towers dedicated to St. Matthew, St. Jude, St. Simon and St. Barnabas.

The Passion Facade work began in 1954 and it was completed in 1976. Its construction guided by drawings made by Gaudí. However, decorative work has carried out after its initial completion.

This facade is dedicated to the Passion of Christ. As its name suggests, which explains its simplicity, unadorned and with bare stone.

Gaudí described his design of the Passion Facade as follows: “Some will find this door too extravagant. And I wanted it to impose fear.

The Facade of Glory:

The largest and most important of the three facades (La Sagrada Familia) is ‘The Facade of Glory’. It is also the one that will give access to the basilica’s central nave. In 2002, work had started and it therefore not takes very far along.

This facade is dedicated to the heavenly glory of Jesus. And it also represents his rise to heaven. Knowing that he would not see the beginning of this facade in his lifetime. Moreover, Gaudí drew only a few sketches showing his general ideas and plans. Such as representations of Death, Final Judgment, and Glory. As well as, Hell for anyone that deviates from God’s path.

The bell towers that remain to be built will be dedicated to St. Andrew, St. Peter, St. Paul and Jacques d’Alpheus.

Although the outside of the La Sagrada Familia is a work of art in itself. Moreover, we must not forget to mention its interior. The interior is surprising due to its magnitude, light, and decor. And because this incredible monument is far outside the norm. Furthermore, as with the exterior, the interior has great religious and symbolic significance. Design of La Sagrada Familia based on the Gospels and the book of the Apocalypse.