Birth: He was born on 4th March 1678 in Venice
Death: He died on 28th July 1741 in Vienna
Education: His first lessons were in violin from his father Glovanni Battista, who was a barber and a professional violinist, besides being a founder member of trade union of Musicians (Sovregno dei Musicisti d’ Santa cecilia) and a baroque composer.

Health: Antonio Vivaldi had breathing problems from early life. His asthma prevented him from using wind instruments, hence his preference to the violin. He was also excused from attending the Holly Mass due to his short breath.

Antonio Vivaldi joined the church to become a priest at the age of 15 years in 1693. He attained Priest Hood in 1703 and became known as “The Red Priest” because of his Red hair, a family trait. In Venice, Antonio Vivaldi became master of Violin at an orphanage known as Ospedale della Pieta and later a member of their renowned Orchestra. He wrote their sacred Music and was promoted Violin instructor in 1704. His relations with the board of Directors was seldom cordial, lost his job in 1709 but due to his important conduct, was reappointed in 1711. Finally was elevated as music director in 1716.

In 1711 Vivaldi & his father played in a religious festival, his setting of stabat mater (RV621) proved a master piece showing his musical and emotional depth. Antonio Vivaldi continued writing two concerts annually for Pieta who paid him for his works till 1733. 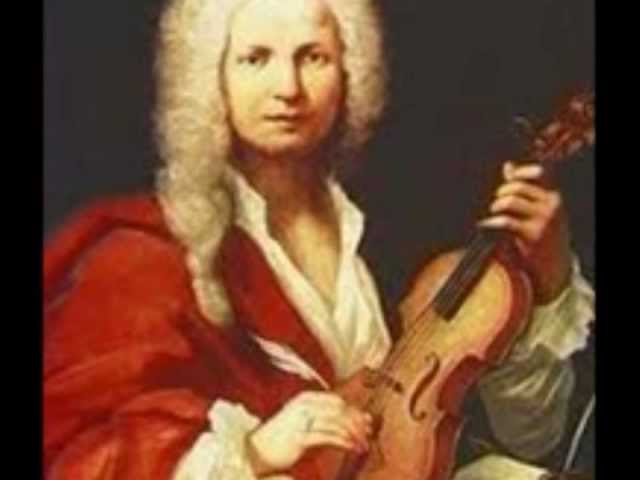 Opera entertainment was popular in Venice and was considered good business. Antonio Vivaldi started his carrier in opera performance from Garzarie theatre in Vicenza in 1713. He became opera impresario in Saint Angelo in Venice. His first performance Orlando Finto Pazzo (RV 727) was not impressive but in 1715 Nerone fatto Cesare (RV 724), with Vivaldi in lead of seven composers, was highly successful. His next opera performance, Arsilda Regina di Ponto (RV 700) was a one-man-show and a total success.

Antonio Vivaldi managed many works for Pieta. The important ones being – Moyses Dens Pharonis (RV 643) and Juditha Triumphans (RV 644) Composed in 1716. His sacred masterpieces were organized to celebrate Italian WAR Victories using solo-instruments. He was now able to perform all over Italy till 1732. His out of routine modern style started gaining popularity. His success attracted opposition from leading musicians who defamed him by various means.  Antonio Vivaldi moved to Mantua in 1720, as Maestro di Cappell in Prince Philip’s court, then to Rome in 1722. His independent style opted an opportunity to play for Pope Benedict XIII in 1725 in Vienna producing 4 operas. His most popular 4 violin concerts, Four Seasons, was produced in the same period.

Vivaldi, at peak performance years, became well-known among European nobles who sent him gifts e.t.c. He wrote Gloria Imeneo (RV 687) for marriage of King Louis XV (opus9), La Cetra for Emperor Charles VI, who awarded Knighthood and a Gold Medal to him in appreciation and invited him to Vienna.

Vivaldi presented many more operas accompanied by his father in later life. He also composed works in collaboration with other leading music writers of his time. Somehow he got messed-up financially and was forced to sell his compositions for petti sums. Finally, he decided to move to Vienna to avail royal invitation and to take the position of a composer in the Imperial Court. His luck fell short as Emperor Charles died as he reached Vienna. Very dejected, he himself died in July 1728 due to ill health soon after.

His Style and Influence

Vivaldi’s compositions, operas, and concerts were occasionally successful and became popular due to non – a traditional style which offered lively joyful modes. Somehow much of his work was lost due to being ignored or misunderstood during his lifetime and later. As usually happens with real genius performers, they remain more or less ignored and do not gather a following to be called heroic. They are born at times when the proper audience is missing to appreciate the depth and feel of their extraordinary qualities. But nature is not unjust. The due appreciation on their real hard struggle and great performances is restored and revived at later years when mankind achieves enough internal finer rhythmic progress. It took almost two centuries for Vivaldi’s works to get proper appreciation from masses. People are now getting to understand how great Musical performer he was. French musicians got attracted to Vivaldi’s concertos when some of his lost works were acquired and revived in the early 20th century. Soon after almost all his, lost works were retrieved from different libraries of Lords throughout Europe. His unique style gained audience quickly as musicians discovered the hidden beauty of his classical and innovative works. Vivaldi wrote for the simple masses mostly and also attracted the intellectually advanced music students and performers. Vivaldi’s reputation, as a great writer/composer, is gaining impetus as his lost treasures are being re-discovered and appreciated by modern masters and producers.

The musical world needs to thank people for whose efforts acquisition of the lost volumes was made possible and those who presented these melodies, themes, operas and so on, to the general public for appreciation. To name a few, National University of Turin Library, Mendlesohn, Frity Kreister’s concerto, Marc Pinchele, Alfred Casella …and many more were active in acquiring and reviving the long misunderstood Vivaldi’s music.

Some enthusiastic people have completed a movie in 2005 named “Vivaldi” a Prince in Venice.

Alfred Tomotis has also introduced theories on effects of music on human behavior and used Vivaldi’s music in Music Therapy on humans.
The World today is again listening to the music of this Great Master. Many of his recovered works have already been played in different continents. The list below may still be incomplete as more lost Vivaldi’s works may come to light in the coming years.