Will the Costa Concordia Prove to be Another Titanic?

The final attempts to salvage the multimillion dollar luxury cruise ship – the Costa Concordia – have finally begun on Monday, 16th of September, 2013. The cruise liner, which was built for travel and leisure purposes by Costa Cruises (a well-known Italian firm), had only started out on the first leg of its voyage from Civitavecchia, Italy on 13th January, 2012 when it hit a submerged reef close to the shore of Isola del Giglio only a few hours later.

Costa Concordia, the beautiful and luxurious travel and leisure cruise ship, started out on a familiar route on the 13th of January last year, not knowing that the voyage it had started upon would end in a tragic fate for many. The partial sinking of the travel and leisure ship on the seabed of the Island of Giglio was caused by nothing more than a sheer negligence of the captain caused under the influenced of vanity.

Around 4,252 people had boarded the ship that day in the hopes of luxurious travel and leisure activities. 3,206 people out of these were the unassuming passengers, while all the others were crew members. Under the captain’s orders the ship steered away from the usual route sailing closer to the island to perform an unofficial solute to the people on the island. Schettino was unable to identify a large rock protrusion off the island in time and this resulted in the fateful collision leading to a power failure on the ship shortly after. The travel and leisure cruise liner was on a computer programmed automated course; however the Schettino changed the course of the ship claiming to be familiar with the seabed of that area. He later told that the ship’s system was unable to detect the rock in time and when he did, it was too late to turn the ship in time.

But the collision had not been the only reason of the partial sinking and the loss of lives of people on board, it was also caused by the selfish negligence paid by the captain after the collision. Many passengers later reported that the collision was hard enough to be heard in the dining room where most of the passengers were at that time. Some had even reported later on that the crockery had fallen on their head and that they were asked to wear life jackets soon after. However, the captain ordered that none of this should be reported back to the coastguard of the local area. 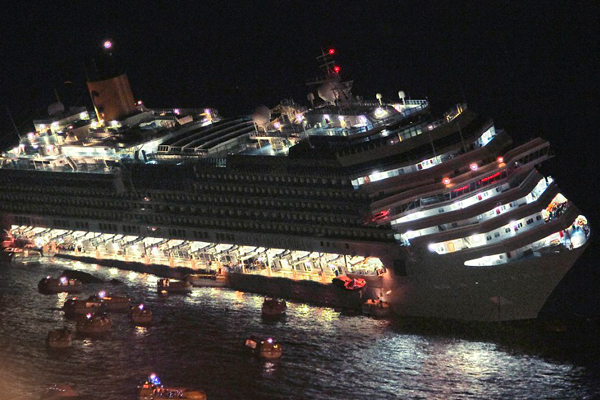 Audio recordings of the coast guard had later revealed the crew member informing the coast guard that it was only a ‘black out’ and nothing else and that they were verifying the situation and further more that they DON’T need help. Meanwhile the huge travel and leisure ship had gone from slight tilt on the side where it was hit to a severe tilt on the other (starboard side) after it had been rotated and moved from its position due to waves and wind. The tilt made the ship come to a rest on the seabed beneath the water keeping it from sinking all the way down to the base of the sea.

The crew members tried in vain to calm down the panicked passengers. Thirty seven minutes after the collision, the captain asked the crew members to inform the coast guard that there was some kind of ‘failure’ and that they need assistance without relaying complete information about the crash of this travel and leisure ship. And after a little more than an hour, Schettino finally gave the orders to leave the ship. The evacuation was halted several times; sometimes due to the tilt of the ship which caused the lifeboats to become inaccessible and sometimes because of the fact that the ship kept on moving slightly. While many were rescued that very night, others were found lingering on to the exposed area in the morning. 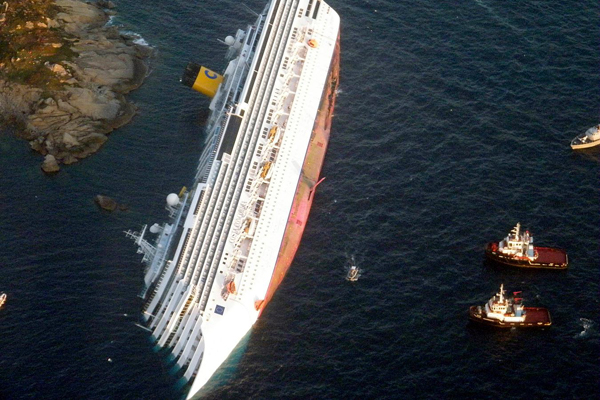 Out of the 32 that were dead, the bodies of two have not been found as yet. The harsh weather, lack of decision making at time and the tilt of the travel and leisure cruise ship has halted the rescue mission of the ship and those people several times. It was finally decided to parbuckle the ship but salvaging a ship of this size and which has been tilted in the sea water for more than 1 ½ year is an unprecedented task; one which the authorities are fearing to undertake to the high risk of pollution of local area involved.

However the mission has begun recently and after periods of pauses divers have been able to place chains, that weigh thousands of tonnes, around the ship to help it parbuckle. It is planned to float the ship to mainland where it would be salvaged for scrap.

One Reply to “Will the Costa Concordia Prove to be Another Titanic? A Cover Story!”