The Americans love chocolate and are simply extremely addicted. They consume it in various forms and by the tons in a year. They enjoy its unlimited taste varieties in thousands of items produced that carry visual appeal that excites their appetite. Now being the part of their lifestyle, it also used as food and ice cream toppings.  The ultimate food addiction has gone right into their blood and cannot live without it , as research studies show.

Why is Chocolate Given to Soldiers?

The American military could not ignore this lifestyle either, even in emergencies and on the borders and active fronts. The experts had put their heads together and discovered some benefits of chocolate. Before the World War II period, the American researchers proved that chocolate can be used as a morale booster by the forces besides regular food, when deployed. So they decided to replace the casual snack food by chocolate made specifically for this purpose. This could also reduce the weight carried by each soldier.

The job of making chocolate, the ultimate food, more compatible to military regular adoption was entrusted to the Hershey Company. The target was to produce a chocolate bar that would not melt at high tropical temperatures and should taste a little better than boiled potatoes to make it less tempting to reduce over-use and lastly should have high energy value. The bar size was also adjusted to fit regular uniform pockets and its weight limited to 4 ounces.

The chocolate development was termed D Ration bar. This was also termed as Logan Bar, nicknamed after the Army Quartermaster, Colonel Paul Logan who persued the idea. M/S Hershey was too pleased to undertake the project with their chief chemist developing a workable formula to fulfill the limitations.

The initial experimental production was delivered in 1937. Thereafter, the Hershey Company had to build a new production plant to suit the precise formula and mass produce this temperature-resistant chocolate. Finally, a hard block of brown chocolate was produced that could resist 120 degrees Fahrenheit and wrapped in aluminum foil. It provided the soldier 1800 calories as recommended each day. The trial order of about 100’000 D Ration Bars was field tested in Texas, Panama and even by Admiral Byrd’s third Antarctic expedition and were found satisfactory except for the intended awkward taste. The military started buying periodically thereafter.

The Pearl Harbor was attacked by the Japanese, thus starting the World War II. Hershey Company was asked to make the chocolate packing poison gas proof. The company covered the smaller packing with anti-gas coating and also coated the master carton for safety. During the massive use, the unfavorable comments arose against the chocolates somewhat bitter taste and that it was too hard for many to break my teeth and had to be sliced by the knife before eating. Also that many threw it instead of consuming, being too unpalatable for quite a few. This massive detest could not be ignored by senior officers. 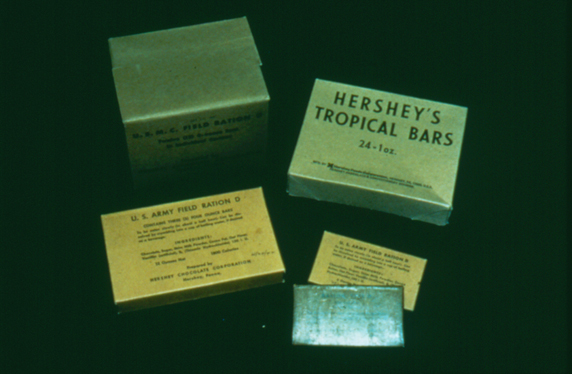 The Army contacted the Hershey Company to produce a better-flavored chocolate bar that could resist heat but should be easily chewable instead of the present hard block needing slicing. This was now to be suitable for the Pacific region temperatures. The company undertook the assignment, revised the formula through experiments and was successful to produce the better product.

The tropical bar was termed K ration. This was produced in 1 and 2 ounces per pack in 1943. From 1945 the 4 ounce D ration bar size was also restored. The changes made in the formula followed the pre-condition that taste should not be too tempting. Although the outward resemblance was normal still the soldiers found it unappetizing and reportedly often traded off with the locals for more tasty eatables. Later it was found that persons with “dysentery” did tolerate this “dysentery ration”.

The formula was again changed in 1957 to make it more tasty and palatable by replacing oat flour with milk powder and vanilla flavors, besides other content changes. During the war period from 1940 to 1945, over 3 billion D ration bars were made, averaging about 24 million a week. The company was decorated with Army-Navy ‘E’ Award for Excellence for performance better than expected.

This Award was repeated 5 times for mass producing this ultimate chocolate. The Tropical Bar was used last in the Vietnam War and then discontinued. However, it was used by Apollo 15 crew in 1971.

The U.S. Army Natick Labs researched on a new high-temperature chocolate “Congo Bar” that tasted better and resisted heat up-to 140 degrees Fahrenheit. The military operations “Desert storm” and “Desert Shield” were supplied with this new chocolate bar. The “Desert Bar” received somewhat mixed acceptances and remained in limited use. After the Army operations ended the Production was discontinued. Limited stocks went to the local market as “Novelty” till supplies exhausted.

The American lifestyle will stay tuned to the chocolate, in whatever form or shape it is made being their ultimate snack food consumed anywhere and everywhere.