Digital camouflage is essentially any camouflage pattern developed with the help of the computer. You enter data into the computer about the colors and their percentages, and the computer spits out a pattern. This pattern is refined over and over again until it pleases the human eye.

Most of the early digital patterns were pixelated because early computer designs were a bit crude. It was an initial endeavor, and computers from that era could only handle a limited number of facets, so it’s all straight lines, planes, and angles.

Now computers are advanced, and “stealth planes” have smooth, rounded curves. You don’t need a pixelated pattern with more sophisticated computers, although they are the newest “in.” Computers can make curves while processing numbers about how many colors should have a pattern. 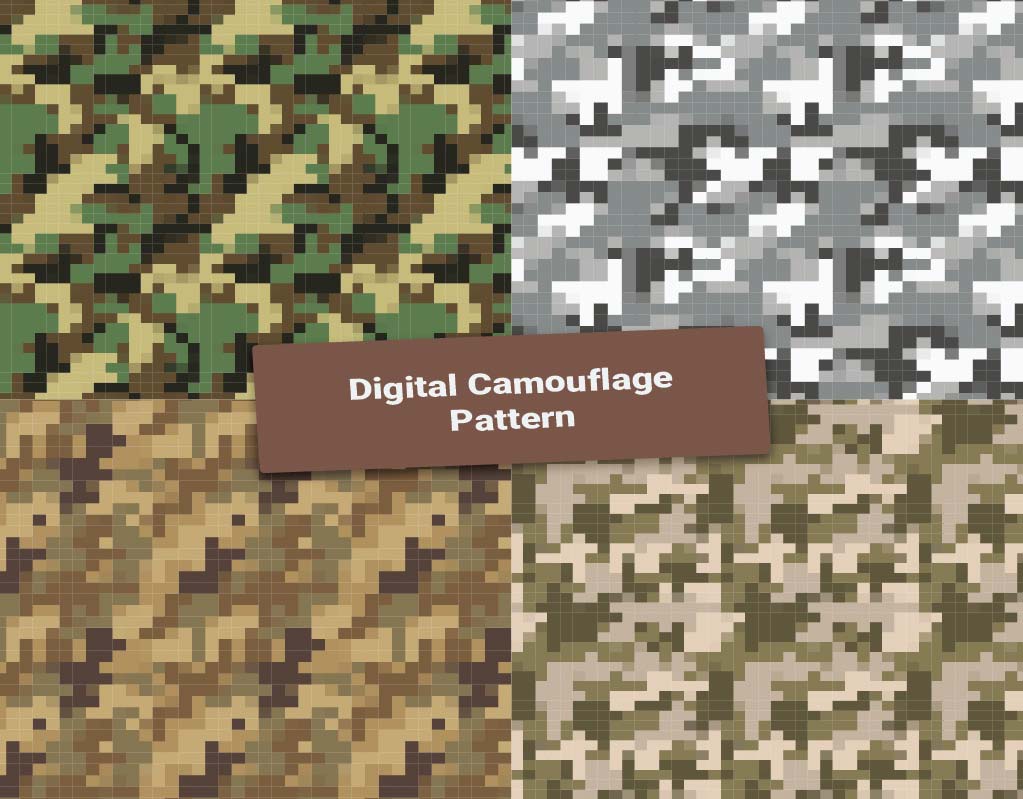 Ever Wondered Why Some Militaries Have Strange Pixelated Camouflage?

In recent years, the military around the globe has deserted their disguise designs for a more pixelated, machine-planned cover, like the blocky illustrations in the well-known web-based game “Minecraft.”

And while it may seem counterintuitive, the digitally printed look of pixelated camo is noticeably more effective than previous designs that seek to mimic nature.

Pixelated patterns bring the two ideas together. Up close, the small patches mimic natural patterns on the scale of a tree’s leaves, but from farther away, the groups of squares create a macro texture that blends in with branches, trees, and shadows.

A study commissioned by the Office of Naval Research showed that soldiers wearing the Navy patterned camouflage (MARPAT) took 2.5 seconds to detect, while soldiers wearing a solid color, or the large, blotchy camouflage of the NATO, anyone could see them in just a second.

In an armed conflict where the enemy is within visual range, these seconds make a difference in the world.

However, some pixelated camouflages have not been as successful.

The overly ambitious US Army deployment of a Pixelated Camouflage (ARPAT) turned out to be a too simple solution for the various war scenarios that US Army soldiers find themselves in.

The UCP (Universal Camouflage Pattern) adopted by the military in Afghanistan turned out to be a colossal mistake. Its lack of brown tones made the soldiers stand out clearly against the mostly desert backgrounds.

Tests have repeatedly shown that pixelated camouflages, provided they use the right colors, are the winners.

This lesson was perhaps lost on the Chinese, who revealed a shocking maritime camouflage scheme on various armored vehicles and missile batteries in their military parade on September 3, 2015.

Pixelated blue camo makes little sense for ground combat vehicles, and even an amphibious vehicle would lose the need for a bright blue camo scheme as soon as it gets out of the water.

Perhaps the Chinese chose the color scheme to signal a rhetorical shift in their military’s naval strength approach.

The CADPAT and MARPAT Patterns

These two patterns are somewhat self-similar (in fractals and patterns in nature like vegetation). They are designed to work on two different scales; a genuinely fractal shape would be statistically similar on all scales.

A MARPAT camouflaged target takes about 2.5 times longer to detect than older NATO camouflage, which worked on a single scale. At the same time, recognition, which begins after detection, was delayed by 20 percent.

Fractal patterns work because the human visual system efficiently discriminates images with different fractal dimensions or other second-order statistics; objects seem to “emerge” from the background.

O’Neill helped the Marine Corps develop a digital vehicle pattern first, uniform fabric, two color schemes, one designed for the forest and one for dessert.

The Reason Behind Pixelated Modern Camouflage?

Until recently, camouflage has traditionally been composed of a collection of distorted spots of various sizes using the colors black, green, and brown, all positioned opposite each other to create a pattern. That camouflage design was the military standard for decades and was used around the world. However, since the 1970s, the military has been exploring new ways to make camouflage more effective in the field. After numerous repeated attempts to innovate the design to produce a better version of the pattern, digital camouflage was created. 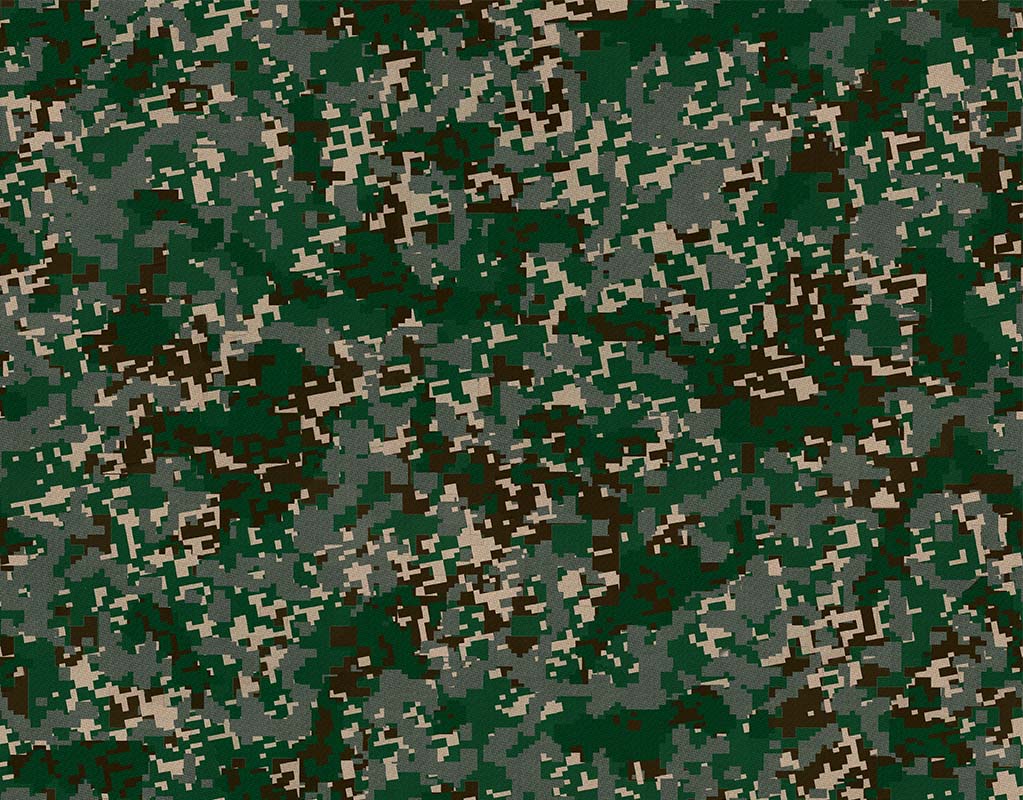 Digital camouflage got its name because of the pixelated graphics that were used to create the pattern. In 2002, the Marines were using this new and improved version. There were two different types in use: one version used to go unnoticed in heavily forested areas and another created for desert landscapes.

A few years later, the Army and Navy adopted digital patterns, each with a pixelated design that used that military branch’s predominant color schemes. For the army, they were shades of olive green and gray. The Marines are favoring the traditional green, brown, and black. The Navy is incorporating blue, black, and gray into their uniforms.

Not all multiscale patterns are made up of rectangular pixels, even if they were designed with a computer. Also, not all pixelated patterns work at different scales, so being pixelated or digital doesn’t guarantee better performance.

The first standardized pattern to be issued was the Italian single-scale mimetic tel. The roots of modern multiscale camouflage patterns can be traced back to experiments in the 1930s in Europe for the German and Soviet armies. This was followed by the Canadian Disruptive Pattern (CADPAT) Canadian development, first published in 2002, and then by American work, which created the Marine Pattern (MARPAT), released between 2002 and 2004.

Going Digital – Is It Worth It?

The expression “computerized” comes from the pixelated design that looks like digitized video pictures. It first tested digital aesthetics to create effective camouflage on a sizable armored personnel carrier in a wooded area. Painting it in two-inch squares in colors that blended with the forested landscapes demonstrated distinctive advantages.

The squares seemed to blend in to make it appear that the APV was barely recognizable against the trees’ backdrop from a distant point of view. Upon closer inspection, the pixelated pattern could emulate sharper details with many other aspects of the environment. Leaves, branches, shadows, grass, everything seemed to blend seamlessly with the digital aesthetic.

The result was a pattern that would successfully camouflage the APV from short and long ranges alike.