The red-fronted macaw inhibited to a small mountainous area of south and central Bolivia. Here the climate is semi-arid with cold nights and hot days. Additionally, it is the only macaw to inhabit such a climatic zone and most of them nest in holes in large trees.

The red-fronted macaw is 55 to 60 cm long. And also known as one of the lightest macaws. Predominantly green with a red forehead and a red patch over the ears. The wing coverts edged bright red to orange. As well as it has red at the bend of wings and striking teal-blue primary wing feathers. Uniquely, it has an area of pinkish skin around the eyes extending to the beak. The olive-green tipped tail ranges from green to blue and the underside of the tail is yellow. 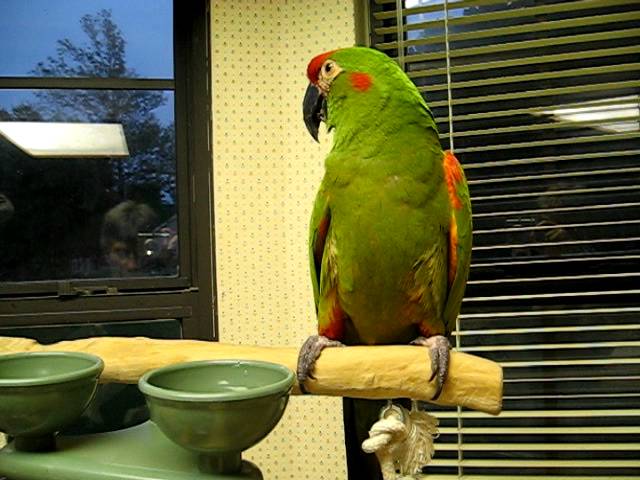 The behaviour of Red-fronted macaw 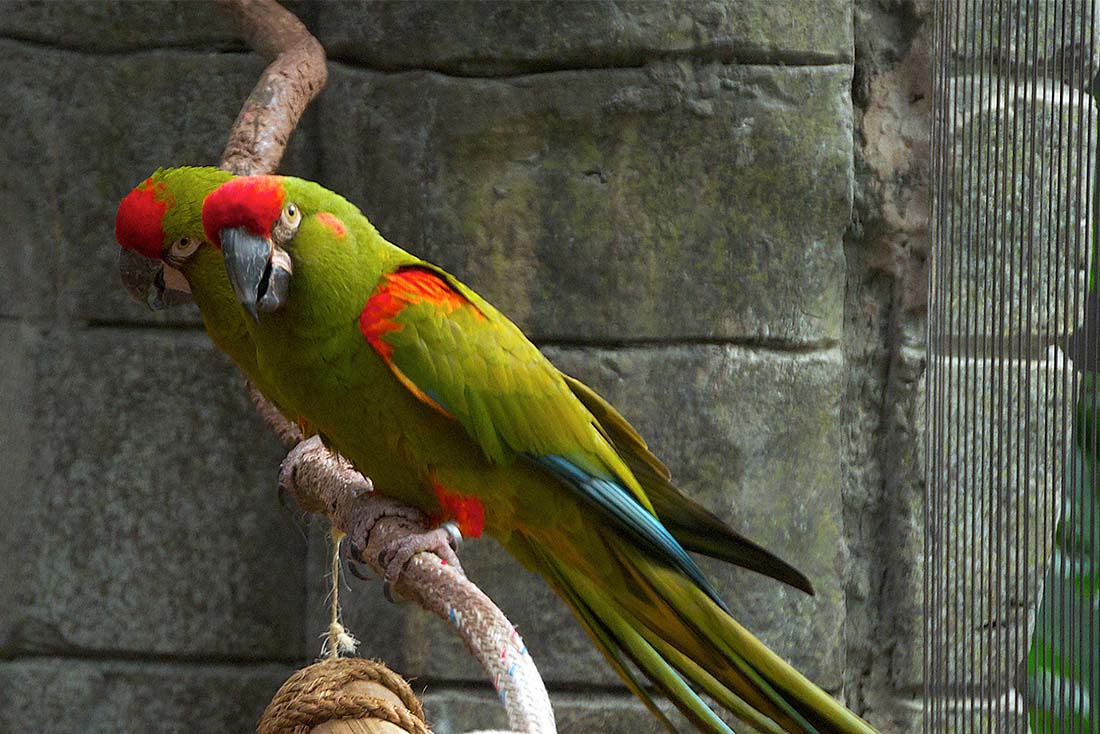 The macaws are active in 23 to 42% of the time during the midday (hottest hours)-playing (predominant behaviour is resting). They spent 11-18% time on social interactions and are rarely found alone. Moreover, the activity level of Red-fronted macaw depends on the age and number of individuals in the flock and of course, they are affectionate, docile, inquisitive and playful. Red-fronted macaw keeps close to nesting sites, flying up and down the cliffs and drainage areas around the valley. While sitting in groups red-fronted macaws exhibit four different play patterns. These patterns include pecking at each other, beak wrestling, fencing, alternating jerks of the body and tossing objects.

Red-fronted macaws are herbivores, frugivore and granivore. They mostly feed on vegetables, fruit (trees such as Jatropha hieronymi are the main source of nutrition) and nuts. Most grasses found in the Bolivia valleys also consumed. Furthermore, cactus (Cereus) include in the diet and serve as a source of both food and water in their arid habitat. Like many macaws, they often chew on sticks or tree bark. As a result of habitat destruction, there are fewer native food sources available. And the birds have turned to cultivated crops. The preferred crop is corn. As the birds will invest hours of time in evading farmer’s attempts to ward them off.

The Red-fronted Macaw were first bred in captivity in 1978. However, thet found to be prolific breeders. The usual clutch consists of 2-4 eggs which incubate for about 26 days. The babies fledge after about 3 months in the nest. In like manner, Parent macaws fed with additional high-fat diet like sunflower seed, during the breeding season. And the young also require a high-fat diet as well as additional protein.

Though it is difficult to identify the illness, so here are some visible signs to be aware of:

Red-fronted macaw costs you around $2895.

Make sure that the conditions are optimal- no draft, cold temperatures or extreme heat. Provide a large room allowing them to move freely. Giving regular baths are a great way to keep good hygiene and prevent any diseases in Red-fronted macaw as they love bathing and goofing around in the shower! Feed them with a diet that is made up of a variety of fruits, nuts, seeds and agricultural crops as well as a diet with extra protein and calcium.

The population of red-fronted macaws has been on the decline since 1991. Moreover, they also listed as critically endangered species on the IUCN Red List. They found to a petite range in Bolivia. Additionally, they are becoming more readily available because of captive breeding. And with increasing habitat destruction their natural food sources are becoming increasingly rare. For survival and sustenance, Red-fronted macaws then turn to human agriculture, mainly corn. Many farmers perceive them as pests. Moreover, they utilize firearms or traps to protect their crops. As of 2009, the population estimate has ranged from 4,000 to as low as 1,000 red-fronted macaws in the Bolivia Valley area.

Red-fronted macaws have been considered as trouble to farmers in Bolivia. Since corn is the main source of food in the red-fronted macaw diet, many crops are affected by their presence. This is deleterious to the production of corn for the farmers who depend on this crop.

Red-fronted macaws have a mutualistic relationship with cactus in the arid area. Since both macaw and cactus limited to the same environment, macaws are a beneficial source of  seed dispersal. After Red-fronted Macaws eat cacti fruits, the seeds are excreted and distributed throughout the valley, thus supporting the population of cactus. While foraging, Red-fronted macaws also inadvertently pollinate some plants.